This post examines the possible connections between a suspected Missouri murderer, Thomas Bruce, and the murders of two young girls in Indiana nearly three years prior.

On Wednesday, November 21, 2018, Thomas Bruce of Imperial, Missouri was arrested and charged with 17 criminal counts including first-degree murder, sodomy, and kidnapping. His arrest ended a 2-day manhunt that had begun on Monday, November 19, 2018 when a man matching his description entered a St. Louis Catholic Supplies store and herded three female employees into a back room where he ordered them at gunpoint to strip naked and commit lewd sexual acts.

When one of the women, Jamie Schmidt, 53-years old and a mother of three, refused to comply with his demands, Bruce allegedly shot her in the head. He then ordered the two remaining women to continue with meeting his demands for lewd sex acts. Jamie died later that day from her injuries at a local hospital. The attack was shocking in how brazen it was: committed in the middle of the day and, apparently, unplanned.

What We Know About The Suspect

Thomas Bruce is a 53-year old, Caucasian, male who does not appear to have any prior criminal record in Missouri other than a traffic ticket in 2001. Law enforcement is currently checking to see if he has warrants or arrests in other states. On his LinkedIn page, Bruce claims to have served in the Navy from 1983-1994. His most recent employment was with American Family Insurance and, prior to that, he held various odd jobs such as a brief 8-month position in customer service with the Jewish Center of Greater St. Louis and a managerial position with a Schnucks Store. He also spent some time as a pastor at the Cape County Jail.

Bruce registered a nonprofit church in 2003 with the Missouri Secretary of State; it was later dissolved in 2007. During those four years, Bruce was the pastor of Calvary Chapel of Cape Girardeau, one of a series of ministries that originally formed out of Costa Mesa, California. Bruce filed for bankruptcy in April 2017 and Wells Fargo foreclosed on his home in August 2017 (note: the Delphi murders occurred on February 13, 2017 and investigators have theorized the perpetrator may have been under personal stress at the time of the attacks). Bruce tweeted Laura Ingraham, a conservative American television and radio talk show host, on February 14, 2017, the day the Delphi girls’ bodies were found. In the tweet, he wrote “@IngrahamAngle favorite Valentine Day song ‘Just Between You & Me’ by April Wine. #bestrockballadever.”

Bruce also posted a cryptic Facebook photo of two nickels resting on a milk bottle cap. One nickel is face up, of THOMAS Jefferson, with the other in profile like a mugshot. The first nickel reads “Liberty, 2017.” It could mean nothing. It appears to be an inside joke amongst friends. But, it’s still worth mentioning. Embedded in the comments is a reference to the song “I Can’t Drive 55,” which includes the lyrics “I tried my best illegal move; Post my face: wanted dead or alive.”

He has a wife and a son. Bruce was arrested at his trailer home in the Quail Run Mobile Home Park on Geranium Drive in Imperial, MO after a tip came in from someone anonymous in the public. Bruce had moved into the home with his wife earlier this year; I would be curious to know where they were living prior to that. It’s clear he has long-term roots in Missouri and originally hails from Michigan; investigators have said they are following up to see if he might have been in Indiana at the time of the Delphi murders. While no concrete links have been made between Bruce and Indiana, some online sleuths have posted unsubstantiated rumors that he has a cousin and/or brother in Indiana and that he would have had to travel through Indiana to get back to his home state of Michigan were he to go visit family there.

Bruce has a history of alcohol use and aggressive behavior. Many of his social media photos show him with an alcoholic beverage in hand and when he was first arrested, a local bartender and waitress recognized him as a frequent patron of their bar who had stopped by for service only a few hours before the Catholic Supply Store attack. In October 2018, only a month before the crimes, Bruce allegedly became involved in a road rage incident. According to the witness, who reported Bruce to authorities, Bruce was weaving in and out of traffic and riding other cars’ bumpers until he caused a fender bender with the witness.

The witness described Bruce as yelling and thumping on his chest, becoming even more aggressive when the police officer arrived on scene. Reportedly, Bruce became entitled and was shouting at the officer that he pays for the officer’s salary via his taxes and “you work for me.” The officer was able to de-escalate the situation and no charges were filed.

Similarities With The Delphi Murders

Some online sleuths have theorized that Thomas Bruce may the Bridge Guy, or “BG” — the primary suspect in the 2017 murders of two young girls in Delphi, Indiana. Go here for background on that case.

Investigators are curious about a possible link between Thomas Bruce and the Delphi murders and are currently pursuing any leads related to that. The primary links appear to be Bruce’s outfit matching that of Bridge Guy’s and the control of multiple female victims in one crime scene, chosen for apparent opportunity. If Bruce is the Delphi murderer and was wearing his “murder” outfit again in St. Louis — that would indicate a certain twisted mind: one in which he wanted to taunt authorities and highly egotistical, believing he was untouchable. 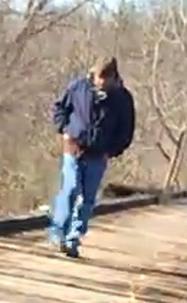 Differences Between The Crimes

Authorities are looking into whether Bruce was involved in other unsolved crimes within Missouri as well as in other states. Due to the especially vulgar nature of his crimes, he is eligible for the death penalty if found guilty. It is unknown at this time whether any DNA evidence has been extracted and whether Bruce has provided any type of confession or denies the allegations against him.

What Are Your Thoughts? Please Post Them In The Comments Below.

Thomas Bruce appeared in St. Louis County Circuit court yesterday. He has been charged with first-degree murder and multiple counts of sodomy, armed criminal actions, kidnapping, burglary, and tampering with evidence. Bruce is being held without bail and is being represented by a public defender and Bruce reportedly plans to plead ‘not guilty.’

Bruce was tracked down when a waitress at another establishment recalled someone matching the Catholic Supplies Store attacker having come into her restaurant shortly before the murder. He left a business card behind, which she retrieved from the trash and handed over to police. This behavior suggests a high degree of narcissism and a sense of invincibility — the belief that no one would catch him even if he left behind tangible clues.

I would be shocked if this was Bruce’s first crime. The level of depravity involved and brashness is astounding. He displays a combination of organization as well as disorganized behavior in regards to his alleged crimes. For instance, he had the wherewithal to manage 3 adult victims in a highly public location yet was disorganized enough to haphazardly bury the clothes he had been wearing in a plastic bag under his trailer home. Why not burn or better discard of them in a dumpster, etc? Was he trying to hang on to them for trophy purposes? Were there other items in the bag? Trophies from other crimes? Or was he really just that absent-minded or cocky to think he wouldn’t get caught? 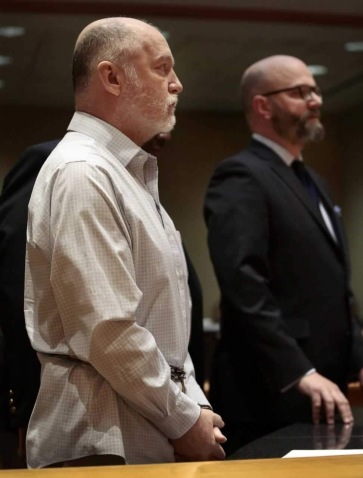 Some online sleuths are theorizing that Bruce may, in fact, be the I-70 killer. This as-yet unidentified serial murderer is believed to have killed at least 6 store workers in the Midwest (Indiana, Missouri, and Kansas) during the spring of 1992. The killer is also suspected of shooting 3 store clerks in 1993 and 1994 in Texas; one of the victims survived. In general, the killer targeted specialty stores and used a .22 caliber gun to control his victims. Of those murdered, all were shot with a single bullet through the head, just like Jamie Schmidt in the Catholic Supplies murder. Most of the victims were petite brunette females; one was a male who may have been mistaken for female due to his ponytail. Of note, none of the victims were sexually-assaulted and only a small amount of cash was taken from any of the stores, leaving the motive a bit unclear. 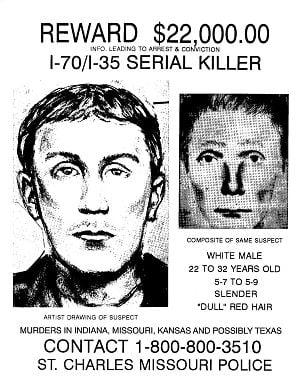 49 thoughts on “Is Thomas Bruce the Delphi Bridge Guy?”